It becomes expensive if we always collect labeled samples for each new domain. To avoid the cost of annotation, Domain adaptation techniques aim to tackle domain shift between the source and target domains with unlabeled or weakly labeled images in the target domain. The task has been challenging because of the gap in feature distributions between domains, which degrades the source classifier’s performance. Domain adaptation has been applied to various applications such as image classification, semantic segmentation and object detection.

In domain adaptation contexts, the key of adaptation between different domains is always considered to be alignment, which inspired many discrepancy based methods. Recent works focus on improving alignment from different aspects, or increase adaptation by using semi-supervised learning. In our project, we reimplemented three methods aligning different domains to solve image classification tasks in different domains. In this work, we started from scratch and plan to achieve the same performance as is mentioned in [1], [5] and [3]. We performed experiments in VisDA [6] dataset, MNIST[11], SVHN[12] and USPS dataset. Our experiment result almost meets the performance from papers. Besides, we make small modifications of some method, which improves the results further. The implementations of all the methods are well analyzed with learning curves and feature representation.

Domain Adaptation Unsupervised domain adaptation aims to transfer the knowledge from one or more labeled source domains to an unlabeled or weakly labeled target domain. Various methods have been proposed for UDA (Unsupervised Domain Adaptation). Alignment based models aim to align the feature distributions of the source and target domains. Such methods are based on analytic results indicating that the lowest upper bound of the error on target domain is achieved by minimizing the divergence between source and target domains. However, some of these works measure domain divergence by generating hidden features of the network without considering the relationship between its decision boundary and the target features, as recent works do.

After careful analysis and comparison, we select 3 typical works which represent modern approaches to domain adaptation and decide to re-implement them. The methods are generally based on unsupervised or semi-supervised learning. Some approaches focus on respecting decision boundaries between classes. The first work is based on classifier discrepancy [5]. To be more specific, at [5], Saito proposes a novel methodology focusing on extracting discriminative features by considering the output of discriminators. The other two utilizes dropouts and classifier entropy [2] [3] .

In our project, we will mainly focus on re-implementing methods which capitalize on decision boundaries.

“Maximum classifier discrepancy”(MCD) [5] has proposed a novel adversarial training method for domain adaptation. It focuses on extracting discriminative features by considering the output of discriminators (shown in Fig.2.). As described in [5], suppose we have labeled source data {Xs, Ys}, as well as an unlabeled target image xt drawn from unlabeled target images Xt. We train a feature generator network G, which takes inputs xs or xt, and classifier networks F1 and F2, which take features from G. F1 and F2 classify them into K classes, that is, they output a K dimensional vector of logits. We obtain class probabilities by applying the softmax function for the vector. We use the notation p1(y|x), p2(y|x) to denote the K-dimensional probabilistic outputs for input x obtained by F1 and F2 respectively. As a result, we have discrepancy loss (L1 loss):

The detail of training process can be split into three steps.

We train both classifiers and generator to classify the source samples correctly.

In this step, we train the classifier (F1,F2)as a discriminator for a fixed generator(G).

We train the generator to minimize the discrepancy for fixed classifiers.

We also reimplemented "Adversarial dropout regularization."(ADR)[3]. The core idea (as shown in fig.3.) of [3] is a novel utilization of dropout. In this method, instead of maximizing the discrepancy between two classifiers, we forwarded input features with different dropouts into one classifier C twice. As a result, the paper denoted two different results as C1(G), C2(G). In order to improve the sensitivity of the classifier, they introduce the KL-divergence. Here, p1 and p2 are the result from C1(G), C2(G) separately.

The main training process in ADR is quite similar to method in [5]. Comparing with [5], we have one more entropy term in step C. The step C in this method is as following

However, after implementing it based on kl divergence discrepancy, we found the result is not good. So following what had been notified in the appendix part of paper[3], we used entropy of the classifier output instead. To be clear, instead of calculating adversarial loss in the following way

We calculated it with the entropy of the classifier output as shown in the following formula:

Besides, we also add another C’ in our model. We only trained it in step A to make sure it can classify the result correctly. 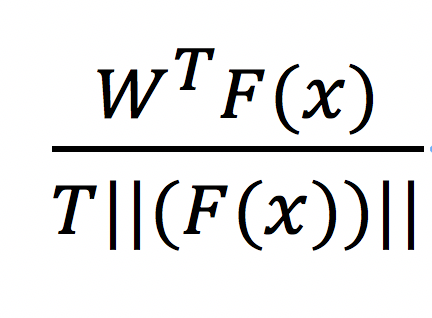 The logits pass a sigmoid function and are perceived as probability. The weight vectors can be regarded as estimated prototypes for each class. The general architecture of the model can be viewed at Figure 4.

The model estimates domain-invariant prototypes by performing entropy maximization with respect to the estimated prototype. Then, it extracts discriminative features by performing entropy minimization with respect to feature extractor. Entropy maximization prevents overfitting that can reduce the expressive power of the representations. The model use a standard cross-entropy loss to train F and C for classification:

MNIST[11] database has a training set of 60,000 examples, and a test set of 10,000 examples. It is a subset of a larger set available from NIST. The grayscale digits have been size-normalized and centered in a fixed-size image. The size of image in MNIST is 28*28.

We used torchvision to load these datasets with batch size 64. At the same time, since the image size in different dataset is different, we resized al the image into 32*32 and then normalized all the images with mean 0.5 and variance 0.5.


As for the image classification experiment, we also used VisDA[6] dataset which represents the largest for cross-domain object classification, with over 280k images across 12 categories in the combined training, validation, and testing domains. This dataset evaluates adaptation from synthetic-object to real-object images. The source images were generated by rendering 3D models of the same object categories as in the real data from different angles and under different lighting conditions. It contains 152,397 synthetic images. The validation images were collected from MSCOCO [13] and they amount to 55,388 in total. Figure 5 is an example of VisDA.

The measurement of domain adaptation is simple: accuracy. We divided our results into two parts, one on digital datasets and another on VisDA datasets. 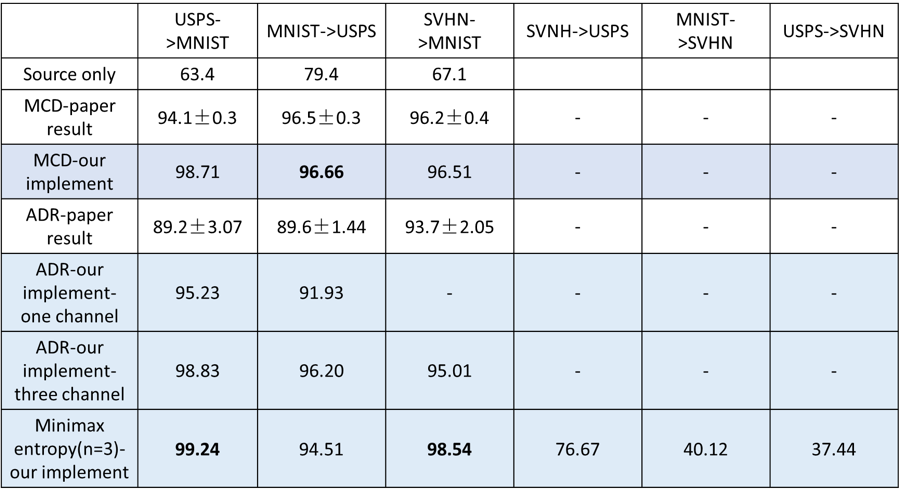 As is depicted in Table 1, the white part is results stated in the paper, while the blue part is our result. For MCD and ADR models, It is clear that our model reaches comparable or better performance as original implementations. There are many other things to be pointed out in our result.

We used Adam optimizer with the learning rate set to 0.001 in both ADR and MCD models. In each iteration, after implementing step A and step B, we updated the generator 4 times.

For the ADR model, the original implementation on digital datasets has some drawbacks. That is, the mnist and usps are treated as one channel gray-scale image, which leads to over simplified model structure. Therefore, we have improved the original model by converting the image into 3-channel color space, and have tested the learning curve with optimized implementation. For the experiment result, it is clear that our implementation outperforms the result given by the original paper. We can also explain the result by diving deeper into the learning curve. 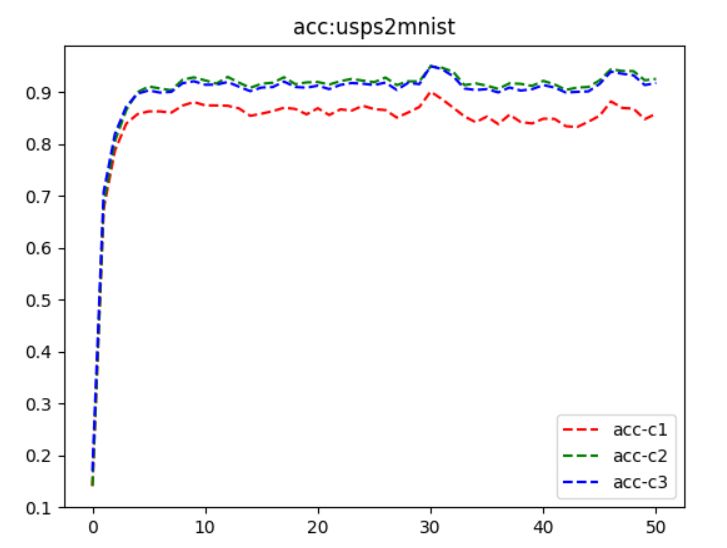 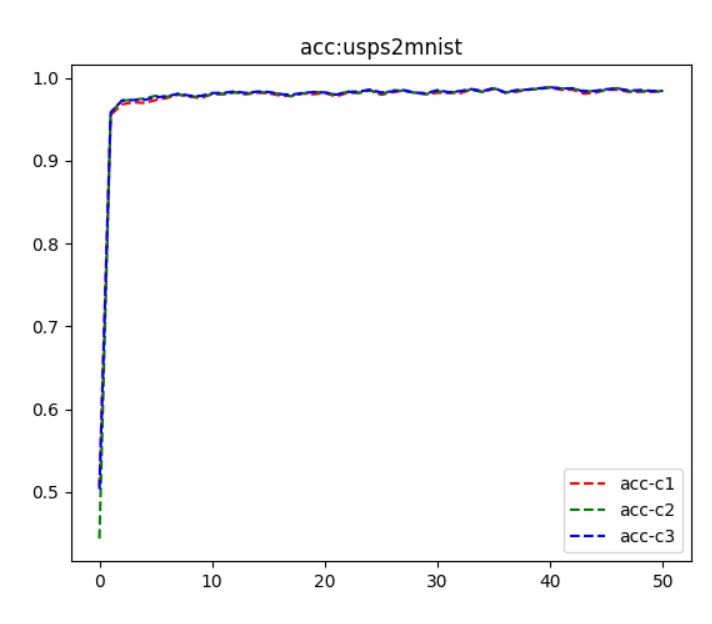 Figure 7. Our result of ADR usps2mnist

For the Minimax Entropy model, the paper does not provide results on digit datasets. But we conducted experiments on them as new experiments, expecting comparison between Minimax Entropy and MCD, ADR. From table 1 we can see from SVHN to MNIST and from USPS to MNIST this model outperforms all other models. However, it adapts extremely badly when the target domain is SVHN. Our guess of explanation here is that the entropy model actually depends too much on the source domain. If the information from the source domain is not enough theoretically for classification on target domain, the performance will drop significantly. 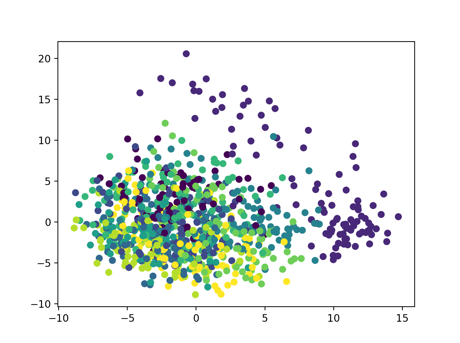 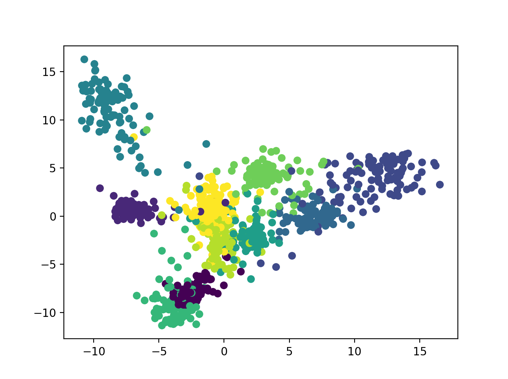 The feature extraction of this model is shown in Figure 8 and Figure 9. After training, the feature is better separated after the extractor, and making classification a much easier task for following structures. 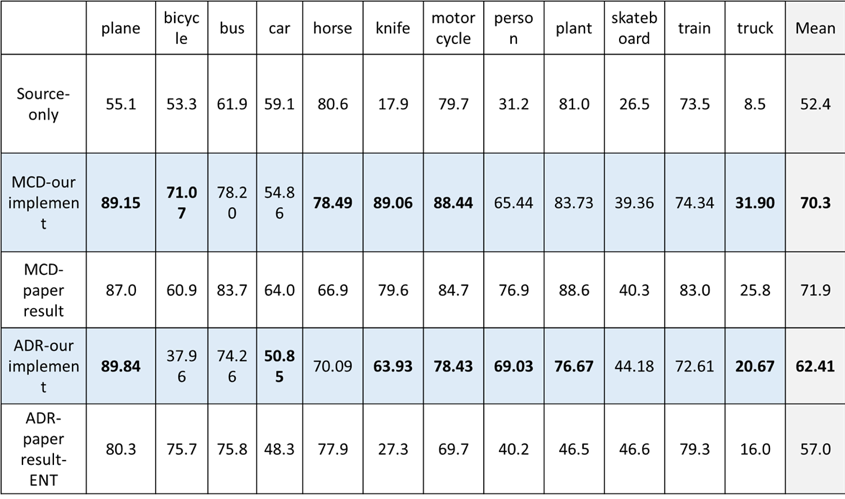 
Table 2 is the result of experiments in VisDA dataset. We mainly performed experiments in this dataset with MCD[5] and ADR[3] methods. The results are shown that even in larger domain shift classification tasks, our implementation still worked well.

In our experiment, we considered the images of validation splits as the target domain and trained models in unsupervised domain adaptation settings. We compared the classification accuracy to show the performance of our implementation.

We used the ResNet101 [14] model pre-trained on Imagenet [15] as the backbone of our model. The final fully-connected layer was removed and all layers were updated with the same learning rate because this dataset has abundant source and target samples. We regarded the pre-trained model as a generator network and we used three-layered fully-connected networks for classification networks. The batch size was set to 32 and we used SGD with learning rate 1.0 × 10−3 and momentum 0.9 to optimize the model. We report our best accuracy.

Meanwhile, As for MCD, we added class balance loss at step A and step B which is also mentioned in [5]

We set constant term and multiply this term to the class balance loss.